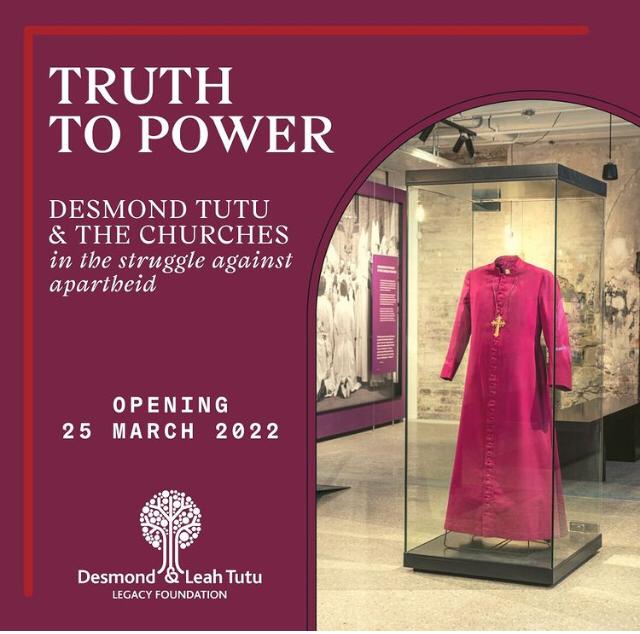 As events in Eastern Europe unfold so hideously on our television screens, and soon, at our petrol pumps, we feel the loss of values-based leadership, the loss of the Arch, particularly acutely. There is a palpable void that it is our collective challenge, as human beings, to fill.

Archbishop Tutu was not a one-man band. He was as dependent on those around him as anyone else. Had he been on the list of speakers tonight he would have told us that he wouldn’t have been the subject of a public exhibition had he not stood on the shoulders of others, who lifted him up – and had he not sported a recognizable nose. Many of those shoulders are here today. He’d tell us how special we are, and that we should give ourselves a clap.

A few years ago, in their wisdom, Archbishop and Mrs Tutu established a Trust alongside their Legacy Foundation. They wanted to free the Foundation of the burden of running their personal office and affairs, and allow it to focus on programmes and projects to keep the work relevant and alive.

I want to say to the chairperson of the Foundation and his Board, to the outgoing CEO and her staff, past and present, to the Apartheid Museum and all who contributed to developing this exhibition: Thank you. Enkosi. Baie Dankie. Re a Leboga. You have done the Arch proud. Through you, he will continue inspiring new congregants today and tomorrow. It is a great privilege for the Trust to work with the Foundation from this historic space, now deeply rooted in the philosophy and memory of our beloved founding father.

The front page of the Trust’s website lays down the challenge that confronts us, in the words of the ancient Greek playwright, Aeschylus: “Memory is the mother of all wisdom.”

Archbishop Tutu’s wisdom lay in his understanding of the human condition – the human family, God’s family, he called it. He understood the primacy of our inter-dependence, as human beings. He had a natural grasp of the concept of the global village long before the term became de rigueur. And he intrinsically got it that a village built on foundations of inequality, bullying, nationalism and injustice was undesirable and unsustainable.

This wisdom, this blueprint, we call the Arch’s “heirloom for humanity”. It embodies, as he did, the yearning of many people for a new approach to leadership based on shared human values of equality, compassion and sustainable custodianship of the earth.

Our collective responsibility, as Trust and Foundation, is to gather and preserve it, make it accessible to present and future leaders, and repurpose it in relevant ways to confront the new and old challenges ahead of us.

The Archbishop’s footprints traverse the planet. In a sense, memories of him are virtually uncontainable. There are important collections of his sermons, letters and speeches housed in various academic institutions, locally and internationally, the Legacy Foundation has gathered together and collated a large quantity of artefacts – but there are also many footprints that have never been gathered or recorded.

It’s like a giant jigsaw puzzle for which we don’t yet have all the pieces.

As you engage this exhibition, this extraordinary body of work, my challenge to you is to see beyond the beautiful images and the warm, fuzzy feeling that being in the Arch’s presence naturally evokes to glimpse the heirloom contained within. For he was a human role-model.

The love, fairness, humour and compassion, but equally the truth and the courage and the feistiness. And the consistency…

The Arch’s departure to the land of ancestors does not let the State of Israel off the hook for the apartheid it practises against Palestinians. It doesn’t free homophobes on our continent to victimise their sisters and brothers, or misogynists to reinforce male dominance. It’s not a free ride for the wealthy to continue exploiting poor people.  It doesn’t say to oil producers, ‘continue extracting filth’, or to the ANC government, ‘now you’re at liberty to carry on running South Africa into the dirt’.

As we honour the Arch, and treasure the time God gave him to teach us how to be better human beings, we are guided by his values.  Although he said he stood on our shoulders, some things he seemed to understand better than us.

* Remarks by Chairperson of the Archbishop Tutu IP Trust, Dr Mamphela Ramphele, at the opening in Cape Town today of Truth to Power: Desmond Tutu and the Churches in the Struggle Against Apartheid, an exhibition showcasing the Archbishop’s life and legacy.