THE WORLD HAS LOST A LODESTAR AND DOTING PARENT 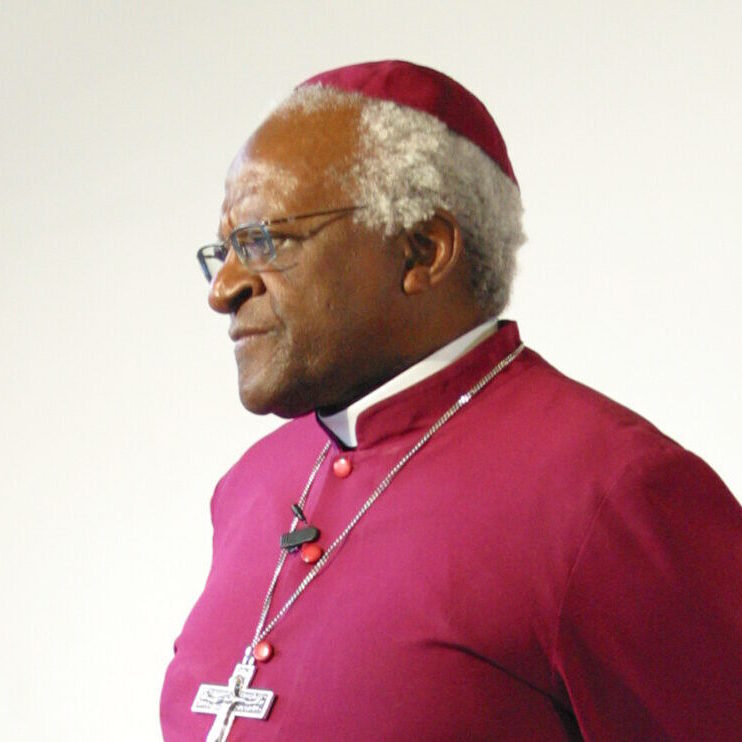 The world has lost a lodestar and a doting parent.

Born in a mining town west of Johannesburg 90 years ago, in the period between colonial and apartheid rule in South Africa, his love, humanity and courage propelled him through the glass ceilings his country and the world imposed on Black people and thought.

His journey through the ranks to head the Anglican Church in Southern Africa, his moral leadership of the struggle against apartheid, including the campaign for South Africa’s economic isolation, his management of the post-apartheid Truth and Reconciliation Commission – and the cocktail of faith, compassion and justice he consistently exuded – led to him occupying a central seat at the world table of human righ

The company he kept included monarchs, presidents and leaders across the spectrum of human endeavour. But what elevated him to the realms of the extraordinary was that in heart and mind he never deviated from his fundamental path: He was a disciplined priest with a structured faith routine and an elevated sense of pastoral duty and responsibility.

Whether at home, in the office, in a car, visiting Buckingham Palace, or in Gaza, certain times of his day were devoted to prayer. It refuelled him. Without it he would wither, he said.

He was equally at home addressing the United Nations as he was visiting elderly patients in a run-down hospital ward… as he was comforting victims of apartheid atrocities, as he was picking up litter in the street. These actions were all connected in his vision of one connected family and world.

So, too, was his fearlessness and passion in challenging acts of human selfishness, injustice or discrimination wherever they manifested.

In his book, apartheid was more than a crime against humanity, it was a crime against God. It was a sin. And so, too were gender discrimination, homophobia, Islamophobia, anti-Semitism, pollution of the environment…

His became a global voice against nuclear armament, the death penalty and child marriage. As one who had overcome polio and TB in his youth, later living with cancer for decades, who dreamed of becoming a medical doctor – and as priest with deep compassion for the needy and those experiencing any form of suffering  – he was naturally drawn to the health field, to the struggles for universal health care, children’s health, HIV treatment, dignified dying…

He was an activist for justice in Palestine, Myanmar, Sudan, Zimbabwe, Canada, the United States, Australia – drawn like a moth to challenging unfairness, prejudice and intolerance… a critical counter-weight to the earth’s despairing slide through over-consumption and greed to the environmental and social cliffs.

He directly touched an incredible array of people and championed righteous causes.

Although strongly associated with peace and non-violence, Archbishop Tutu didn’t describe himself as a pacifist.

There were certain rare events where violence was unavoidable in the defence of justice. But there could never be any justification for human rights violations – of any kind, committed by any party.

In the 1980’s he threatened to emigrate from South Africa if the gruesome practice of necklacing alleged police informers with petrol-filled tyres was not halted.

And in the 1990s, at the helm of the country’s Truth and Reconciliation Commission, he applied the same balanced principle to spotlighting human rights violations committed by the State and those prosecuting the anti-apartheid struggle. The vast majority of the commission’s findings of violations related to crimes perpetrated by the State, the few that implicated ANC cadres were to have major consequences…

Desmond Mpilo Tutu described himself as a prisoner of hope. Others have defined him as a servant leader, voice of the voiceless, mensch, and pebble in the shoe of injustice.

If he was a saint, he didn’t regard himself as saintly – though he often said God has a soft spot for sinners. The Arch was the first to admit that he had faults, like the rest of us. Among them, he said, was what he described as growing too comfortable in the public limelight, which he viewed as a hint of immodesty. Another was an almost pathological inability to ever say “no”. A third, pointed out by his doting wife Leah, was that he laughed at his own jokes.

Neither was Desmond Tutu a politician. Because his pastoral duty extended beyond the confines of his church he crossed paths with politicians.

In May 1976, for instance, writing as “one Christian to another”, he penned an extraordinarily prescient letter to then Prime-Minister John Vorster. “I am writing to you sir, because I have a growing nightmarish fear that unless something drastic is done very soon bloodshed and violence is going to happen in South Africa almost inevitably.” His letter was dismissed as political propaganda. The following month youth in Soweto sparked a national insurrection.

When apartheid’s grip began to loosen, and Black South Africans were finally able to join political parties without risking State brutality, he discouraged members of the clergy from joining political parties because, he said, they should be able to serve all people equally, regardless of their political affiliation.

Although some of the clergy strongly disagreed with him, the wisdom of this edict became more apparent over time. God’s work, and that of political parties, are not always perfectly aligned. Prophets’ freedom to speak truth to power should not be watered down by party political considerations.

The Arch was regarded by some as being close to the ANC. The apartheid government, for instance – and most media at the time – came to view him as an ANC proxy. It is true that he interacted with exiled leaders of the anti-apartheid movement, including the ANC. After meeting Nelson Mandela in 1990, following his release from imprisonment, they struck up a close relationship which added to perceptions of a special political relationship. But this was never the case.

In 2011, when the South African state declined to issue a visa to His Holiness the Dalai Lama to attend the Arch’s 80th birthday celebrations, in deference to China, the Archbishop addressed a press conference in Cape Town warning the ANC that if it didn’t mend his ways he would pray for its demise, just as he’d prayed for the demise of the National Party of apartheid.

He’d became a stern critic of the ANC long before it became fashionable. He spoke out about the elevated lifestyles of politicians under President Mandela, tussled with President Mbeki about HIV treatment and the unfinished business of the TRC, and warned the nation about the consequences of electing Jacob Zuma to the highest position in the land.

Among the Archbishop’s greatest sadnesses was a sense that, although he’d always strived to do his duty to his country, his country didn’t always do its duty to him.

This was particularly so in respect of the completion of the Truth and Reconciliation Commission process. The Arch poured his energy and soul into balancing the rights of apartheid victims and perpetrators, with the interests of post-apartheid healing and reconstruction, as per the letter of the Act which created the commission.

When the commission drafted a final report including findings of human rights violations committed by the ANC, the ANC went to court to try and block its publication. The court found in favour of the commission, and President Mandela defied his party to officially receive it from the Arch.

Mandela said afterwards that he accepted the report because of the Arch’s integrity.

But Mandela was on the threshold of retirement, and the die was cast.

Instead of implementing the commission’s recommendations, which were fundamental to achieving the balance and justice the commission sought, the post-Mandela government largely ignored them.

And then, instead of owning up and stating the reasons why it chose not to prosecute perpetrators of human rights violations to whom the commission did not grant amnesty, for example, the State sat back and allowed a poisonous narrative to take root that the commission had been too “soft” and done too little to hold perpetrators to account.

Other critical recommendations, such as the implementation of a wealth tax to reduce inequality – that has since deepened – and on the scope of reparations packages, were similarly ignored.

By ignoring the commission’s recommendations, the state reduced it to a symbolic event, and effectively slammed the door on the possibilities of harvesting the fruits of South Africa’s formal reconciliation and national unity process.

Desmond Tutu’s work was richly acknowledged. He received many of the world’s top humanitarian and human rights awards, including the Nobel Peace, Ghandi and Templeton Prizes. He received honorary degrees from an abundance of top universities, and top National awards from many nations, from east to west.

But arguably his greatest prize was conferred on him in July 1955; the certificate of his marriage to Nomalizo Leah Shenxane, a strong woman. A trained teacher, nurse, mother and motor mechanic.

She was his earthly strength for 66 years. She was more than the glue that held the family together, she was his pragmatic confidant and very incisive adviser. She dragged him down to earth, and she enabled him to fly.

While he turned to prayer for answers to life’s most perplexing questions, she provided an unshakeable base at home to keep things practical and grounded. Besides an abundance of wit and intellect to keep him on his toes.

When asked to name the greatest influences on his life, the Arch usually named his mother, Aletta. From his descriptions of her, she was an extraordinary kind and gracious woman. From old photographs, one can tell he also inherited his good looks from her.

But Nomalizo Leah Tutu was his rock.

To Ma Tutu, their children, Trevor, Thandeka, Naomi and Mpho, grandchildren and great-grandchildren, we say: Thank you for sharing your lover, partner and parent with the rest of us. For freeing his grace to seep across the earth.

The world has lost a parent and a guiding star. Now it’s up to us to ensure that the gifts of wisdom and understanding of ourselves that Desmond Tutu bequeathed live on forever.